The digital TV switchover in the UK is happening now and will be complete by 2012, by which time you won’t be able to receive the old analogue signal anywhere. It’s a great thing in the long term and will improve our TV viewing experience but what are the downsides? The negative side effects for some and the huge opportunity for others?

Bad for People Who Don’t Understand It

The confusion and ignorance which has surrounded the switchover is a perfect breeding ground for unscrupulous operators who are moving in to take advantage. It’s reported that some TV retailers have instructed their staff to deter people from buying a Freeview box (which may be only around ?15) in favour of buying a nice new TV at around ?400-500 – this would involve giving misleading information to play down the fact that the Freeview box is all you need, even lying about the technical spec to get the more profitable sale. Whether or not this is true of the high street shops it certainly doesn’t take much imagination to see dodgy guys going door-to-door in an area where the switchover is imminent, telling elderly people that they need to have their aerial changed (not usually necessary) or buy and have fitted one of the boxes from their van (probably costing ?10 second hand and sold to the victim for ?40) or they ‘won’t be able to watch Eastenders next week’.

Until the average household’s transition from old gear to new gear is complete there’ll be a lot more electricity used, as more devices – Freeview boxes, Sky or Virgin boxes, hard disc recorders etc – are added to people’s existing set-up. This will sort itself out over time as firstly we’ll see viewers move to TVs with integrated tuners, maybe built in hard disc recorders also, and in the longer term much more convergence between the PC, digital TV, music and all of the entertainment system in a house. So by extension…

Good for the Utility Companies in the Short Term

As all of those new Freeview boxes left on 24-7 will add up to a fair bit of extra revenue. So by further extension…

Bad for the Environment

Although only while people get their set-up right, after which it should be better. The other short term effect on the environment I guess could be the disposal of unwanted old gear. Most aerials don’t need to be replaced so that should be minimal, and indeed most TV sets are fine to use with whatever means of digital TV you’ve opted for (I’m not upgrading my TV until I need to, regardless of switchovers) so disposal of TVs should only go up by a little as people buy the necessary kit receiving and decide to treat themselves to a nicer telly at the same time.

The disposal problem may come from VCRs, and even some older DVD recorders that have an analogue tuner – no use after switchover. Now I’m pretty imaginative when it comes to reusing old stuff but I struggle to think of a use for a VCR that can’t record – most families playrooms now have better gear than that for watching Peppa Pig on and that’s the only idea that comes close. 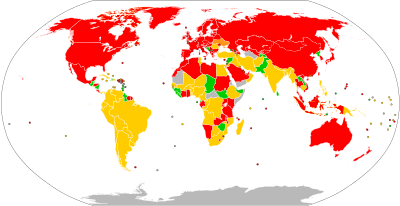 If you’re a landlord or manager of a block of flats, say, you’ll need to consider the communal TV set-up – if you had a communal analogue aerial there before that will be fine if everyone in the block wants to get a Freeview box but will it need adjustment in the signal strength, or will there suddenly be a demand from the tenants for permission to put up a Sky dish? Possibly a headache that landlords could do without at the moment, given their stress levels due to the world financial situation and all.

Bad for the Blind?

When the first switchover took place in Whitehaven in Cumbria in October 2007 there was concern from the RNIB that the set top boxes supplied as part of the town’s ‘Help’ scheme didn’t have talking menus, the software that helps people with sight problems navigate their way through the channels and other options. One local blind resident, Sharon Bowell, said ‘I feel I am being excluded from the so-called digital TV revolution. I have no way of knowing what channel I am on or what programme is on, I can not use the on-screen guide to find out what is on now or next and I can’t even record my favourite programmes. I simply won’t be able to interact in a meaningful way with any of the affordable set-top boxes or digital TVs that are available in the shops.’

Good for Those with Special Needs

However, aside from this problem with the navigation there are a lot of good features to help those with sight or hearing problems – Sky TV have 2 channels on their Sky Box Office movie service for the hard of hearing and visually impaired (738 features signed movies and 739 narrative films with audio description). They also employ a team of six qualified interpreters as their Sign Language Team, and provides sign language on at least seven of their channels. Sky do seem to be leading the way when it comes to helping those with special needs as they also have available an Easy Grip remote control for people who have problems with their hands – it features big easy-to-read tactile buttons as well.

Good for the Retailers and the Entrepreneurs

Staying in the digital pioneering town of Whitehaven, retailers have seen that the rush to buy Freeview boxes has the benefit of the secondary purchases that come with it. If you’re in the shop already the chances are you’re going to pick up some batteries, that iPod charger you’ve been meaning to buy and lots more. In fact it’s often been the opposite way round – customers coming in for the ?14.99 set-top box are tempted by the lovely flat screen HD TV in the window.

Craig Carruthers, manager of Currys in Whitehaven, said of Freeview boxes; ‘Our sales are growing 20 to 30 per cent week on week. A lot of people are buying not just a set-top box but a flatscreen TV.’

This customer rush caused by the staggered timing of each area’s switchover makes me wonder about setting up Freeview Shops advertising Cheap Digital TV, in much the same way as the Fireworks Shops and Christmas Tree stalls appear for a lucrative 2 weeks then disappear. All the entrepreneur needs to do is find out the date of switchover in each area and Bob’s your uncle, there’s a ready made market. Will anybody do this?

Feel free to take the idea and run with it, I need to go and rewind the Peppa Pig videotape in the playroom then settle down to watch our black and white portable telly.